Part 2: Overview of the Peace Movement 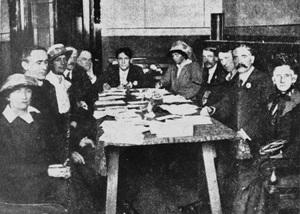 People changed and the failure of the 14-18 peace movement

Whether or not the war had started with just grounds, as it became clear that the war would not be over quickly, as prices rose and wages did not, as wounded men returned with some of them begging on the city streets, as mothers and wives learned to live with the loss of their loved ones or their shell-shocked state on return, as suspicion mounted that this was the same old story of empire versus empire without concern for the workers and farmers who supplied the troops, most Australians changed and wanted the war to end. This change is often ignored in current discussions.

The peace movement of 1914-1918 was a failure in that while it contributed to ending the war it did not of itself stop the war. Other factors brought the war to an end, some on the battlefield, others not often mentioned such as the Bolshevik revolution in Russia and the failed socialist revolt in Germany. However, the activists of 100 years ago took a principled stand and kept alive the flame of commitment to opposing war even as they failed to stop the war.