In late 1915, suspicions arose within the trade unions, Labor Party anti-conscriptionists, and other anti-war constituencies, about government intentions on conscription. In November 1915, Hughes sought information from every 18-45 year old male about their preparedness to enlist; and late that year the Universal Service League began actively lobbying across the country for the introduction of conscription. Then, early in 1916, Hughes was invited to London to study the war situation, and it was feared that when returned he would seek to introduce conscription, as Britain had just done at that time.

Anti-conscription campaigns led by the trade unions and Labor Party anti-conscriptionists became closely linked. On May 10 2016, the trade unions held an All-Australia Trade Union Conference in Melbourne, convened by the Secretary of the Melbourne Trades Hall Council, E.J. Holloway, with delegates instructed by their branches on their position on the issue of conscription for overseas service.[20] The conference declared “its determination to resist any and every attempt to foist [conscription] upon the people of Australia” (with total branch votes amounting to 208,018 for and 753 against).[21] Queensland, NSW and Victoria State ALP conferences all came out against conscription in early 1916. The trade unions and ALP then established a joint national anti-conscription committee and executive, with E.J.Holloway as its secretary, John Curtin as its full-time organizer, and Hyett, Ross and Anstey on the executive.[22] The unofficial headquarters for the national campaign was St Ambrose’s Young Men’s Club in Brunswick, Melbourne. 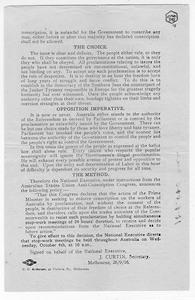 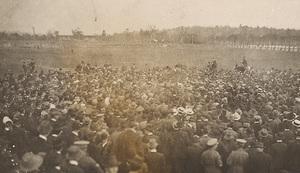 Under the guidance, skills and drive of John Curtin, the Committee circulated an anti-conscription “Manifesto” and organised thousands of meetings across the country, despite raids by the police seeking to seize anti-conscription materials. The Manifesto reflected union fears that conscription would undermine civil liberties, destroy trade unionism, replace Australian workers with non-white labour, and “pour thousands of men and millions of money into the bottomless pit of the European hell”.[23] In urging a no-vote, the union manifesto asked voters to “remember, that next year the casualty lists will show the names of the men whom your votes sent to their death” and appealed to parents “Will your anguish be soothed by the knowledge that your votes have made other men and women childless?”[24]

Union/ALP Campaign rallies on the Yarra Bank in Melbourne or the Sydney Domain reached sizes of 30,000 to 60,000 in the lead up to the 1916 Referendum.[25] Anti-conscription messages and materials were communicated despite the censors through the Australian Railways Union efforts, and such publications as the Labor Call (Melbourne), The Socialist, The Worker (Sydney), the Queensland Worker, and the Ballarat Echo. Key union, Labor and socialist figures in the campaign included Frank Anstey, Maurice Blackburn, Senator Findley, Tom Ryan (Labor Premier of Queensland), Don Cameron, Henry Boote, James Scullin, Henry Kneebone, and Bob Ross.