For 32 years, from September 1939 until December 1971, a small, alternative newspaper, published in Melbourne, was posted to subscribers around Australia. The Peacemaker, which began as a 4-page broadsheet and ended as a 16-page journal, depended entirely upon subscriptions and donations. It took no advertising – the staple of most newspapers. In its early years, during World War II, The Peacemaker survived threats of censorship and paper shortage as well as scarcity of funds. Its longevity was exceptional when compared with the majority of alternative or radical papers, and must be attributed to the dedication of its entirely voluntary staff, including a handful of editors, as well as the desire of some Australians for an alternative opinion to the mainstream media. Theological student Frank Coaldrake, who founded the paper, handed The Peacemaker over to the Federal Pacifist Council in 1946 when he graduated as an Anglican minister and became a Christian missionary in Japan.

Although radical propagandists in Australia have used newspapers as a means of disseminating their messages ever since they had access to printing presses, and even earlier, PM was unique. It espoused a liberal Christian rather than partisan political ideology, yet, unlike “church” newspapers such as the Catholic Worker or the Anglican Messenger, it lacked the financial support of a mainstream Christian denomination; it was dependent entirely upon volunteers for its production; its subscribing readership probably never exceeded 1,500 people nation-wide, and because it eschewed advertising, the most significant source of revenue for most newspapers, it was always on the verge of extinction. Yet, incredibly, the paper survived for three decades and gave comfort and advice to young men facing military conscription during three national service schemes and two wars. 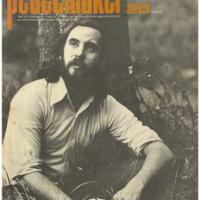 Front page of the last edition of The Peacemaker (newspaper), Dec 1971