While there was no consensus on the issues of strategy and tactics there was considerable unity around the overall structure of the demonstration. Despite some contention about the acceptability by the general public of the act of sitting down and stopping traffic in the centre of the city, it was agreed that the Moratorium demonstration in Melbourne would consist of a rally in the Treasury gardens adjacent to Parliament House, followed by a march down Bourke Street to Elizabeth Street and culminating in the controversial sit-down on the street. The main slogan was ‘Stop Work to Stop the War’ and the demonstration would be held during work time on a Friday afternoon (2pm May 8 in Melbourne – Sydney held their Moratorium march on Saturday 9th May).

Badges, posters, leaflets and newspaper articles all combined to set the scene for the largest anti-Vietnam demonstration seen in Australia. Meetings on work sites, campuses, churches and even short speeches delivered in shopping centres and other places were constant during the months leading up to the march.

What eventuated stunned both organisers and the authorities. More than 100,000 people turned up on Friday afternoon to stop work to stop the war. The demonstrators marched from Treasury Gardens down Bourke Street to the intersection of Elizabeth Street. While those who arrived there sat down, the majority all the way back to Parliament House and the Treasury Gardens were still marching. Half an hour later many demonstrators were still leaving Treasury Gardens and Bourke Street was packed. Traffic was stopped in the centre of the city for several hours while speeches were heard by the minority sufficiently close to the loudspeaker trucks at the Elizabeth street intersection. The majority did not have the opportunity to hear much of the speeches, but the determined chanting of ‘Out Now’ and ‘Stop the War’ made up for it.

The unexpected magnitude and good natured exuberance of the moratorium march and the lack of any violence was noted by some of the media and undoubtedly helped to convince many people that opposition to the war was no longer a minority position. The success of the demonstration also convinced the organisers to hold a second moratorium in September the same year. 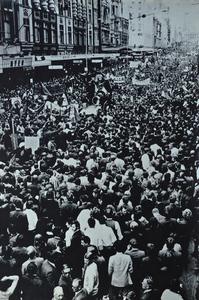 Photograph of the Moratorium in Melbourne on May 8 1970