The Peacemaker made its debut as a 4-page broadsheet format newspaper in September 1939, the month that Prime Minister Robert Menzies committed Australia to the conflict in Europe “because Britain was at war.” Its founder, Frank Coaldrake, combined working as warden at the Brotherhood of St. Laurence’s hostel for destitute boys with study for a theological degree at Melbourne University. Coaldrake was a member of the Christian Pacifist Movement and the Australian Peace Pledge Union, but he sought further ways of expressing his views. He financed the first issue from his meager salary and did most of the editing work late at night when he could spare time from work and study. Initially, the paper was subtitled, “An Australian Venture in Reconstruction,” which embodied Coaldrake’s vision of a post-war world where the kind of poverty he encountered in inner-city Melbourne would no longer exist.

During the war years, The Peacemaker had several brushes with the government censor. From July 1940 until December 1942, the front cover of each issue bore a creed that commenced with the words: “We will not knowingly assist our friends to kill Germans (or any other people). Nor will we knowingly assist Germans [and Japanese] (or any other people) to kill our friends.” “And Japanese” was added in January 1942.

In June 1940, the Victorian State Publicity Censor claimed that the paper was launching “a peace offensive” and that much of the paper’s copy was “deliberately designed to dissuade earnest young men of Christian principles from enlisting.” The Censor proposed banning the entire issue. Nevertheless, the July issue appeared in its usual size and format, and when the August issue was limited to two pages, Coaldrake stated that this was because of lack of time and finance, rather than the censor’s pen. There were no issues for September, October, November or December 1940, although the paper resumed publication in January 1941 and then ran continuously throughout the rest of the war. Coaldrake offered PM to the Federal Pacifist Council of Victoria in February 1946 when he left Melbourne to train for missionary service in Japan. The Federal Pacifist Council managed The Peacemaker for the rest of its life. 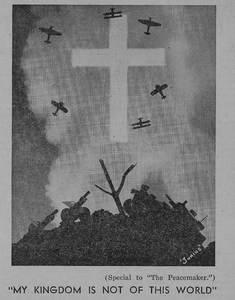 “My Kingdom is not of this world”, one of several cartoons by “Junius”, pointing out the difference between Jesus’ teachings and warfare.  (Peacemaker, July 1940). 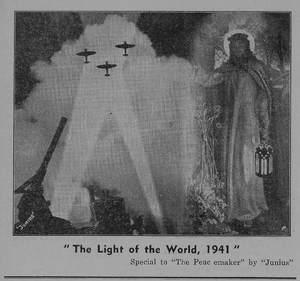