The Vietnam Moratorium: Background and Formation

The Vietnam War, involved large scale US and Australian military intervention from 1965 to 1972, and became a major source of protest and resistance for university students and the peace movement more broadly. The various streams of antiwar action merged together in the form of the national mass movement Vietnam Moratorium Movement from early 1970. Student perspectives ranged from seeing the war as one of imperialism in which the US was seeking control of this part of Asia to broader concerns about its genocidal impact on the Vietnamese people.

1968 was one of the most radical and angry years of protest since the Second World War. The 1968 demonstration at the US Consulate in Melbourne attracted more than 4,000 protesters. The impact of the Vietnamese Tet Offensive in January-February 1968 showed the world that despite claims to the contrary, the US was not winning the war and was not even able to prevent determined liberation fighters from occupying the US Embassy in Saigon (even if only for a few days). It was a massive propaganda victory for the Vietnamese National Liberation Front, and a morale booster for the anti-war movement around the world. Similarly the student-sparked strike that crippled Paris in 1968 encouraged more radical activities elsewhere, including in Australia. The student movement was beginning to organise along more radical lines.

The wider peace movement represented by the Congress for International Cooperation and Disarmament, Labor Party and Communist Party of Australia  began cooperating more closely with student and other anti-war groups. This change in attitude amongst the ‘traditional’ antiwar organisers enabled the development of the Moratorium movement, a broad coalition of diverse anti-war groups along with church and community organisations opposing the war.

On university campuses, there was a surge in anti-war action by student political clubs, such as the new Students for a Democratic Society at Melbourne University and in other universities across Australia and Labour Clubs, especially the Monash Labor Club.

Discussions in Australia during the last months of 1969 led to a national meeting of anti-war groups and trade union supporters in Melbourne in early 1970 to adopt a similar approach, using the same concept of a ‘moratorium’ on the war, to hold a major anti-war mobilisation in May.There followed several large meetings at the Richmond Town Hall, involving hundreds of anti-war activists comprising  trade unionists, SOS, church groups, students and others, to consider the actual demands and aims of the newly named ‘Moratorium movement’. A Steering Committee was elected with Dr Jim Cairns as the Chairman and three vice-chairpersons: Laurie Carmichael from the Amalgamated Engineering Union, Jean McLean (SOS and ALP) and myself (SDS, Draft Resistance - in recognition of the student movement).

The major issues of debate revolved around how to present the war, the demands about the war, and attitudes to conscription. Some wanted to characterise the war as a mistake in or failure of, foreign policy while the opposing argument proposed that it was an imperialist war, motivated by US economic and strategic interests and should be presented as such to the public. The majority demanded an immediate withdrawal of US and Australian troops from Vietnam while more conservative groups wanted simply to demand ‘Peace now’. 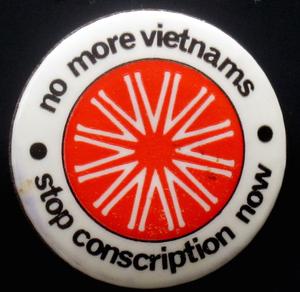 Badge produced during the anti-conscription campaign