The Peacemaker was a powerful mouthpiece for opponents of the compulsory National Service Scheme enacted by the Menzies government, which operated from 1951 until 1959. Most Australian pacifist groups of the 1950s had been active during World War II and were experienced in mounting a campaign against the National Service scheme. Each month, PM listed the contact addresses of peace organisations and civil liberties groups around Australia.

One of The Peacemaker's strengths was its use of material from around the world. Australian pacifists could read about the activities and ideas of pacifists in a variety of situations in Britain, USA, Europe, Africa and Asia. Young men who faced mandatory registration for national service could read how others in New Zealand, Britain, Europe and the USA responded to similar compulsory military service schemes. This made them part of a worldwide community.

The Peacemaker's most valuable roles, however, were to spell out in detail the provisions of the National Service Act, the penalties for those who failed to comply, and the rights of those who applied for exemption, and to publish the results of applications for exemption. The first such case was of Brian Mason. The court rejected Mason’s application in July 1951, and when he refused to obey a call-up notice, he was arrested, placed in military custody and sent into detention at Holsworthy Correctional Camp in NSW. Throughout his detention, The Peacemaker maintained pressure for his release. Vivienne Abraham, PM editor from June 1953 until July 1955, focused the paper on conscientious objectors, for whom she was a strong advocate.  This changed again with the appointment of another editor, W.J. Latona, in July 1953, when the focus became international once more, and remained so through the remaining years of the 1950-59 National Service Scheme and the early 1960s. 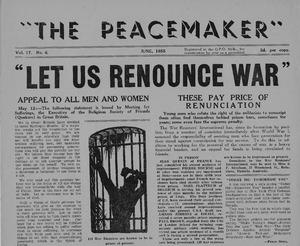 Throughout the 1950s, The Peacemaker continued to plead for nations to renounce war and seek peaceful means of resolving disputes. It also drew attention to the number of war resisters who were imprisoned around the world.  (Peacemaker June 1955).