By the time of the September 1970 Moratorium major changes had occurred in the nature of the Vietnam war and US policy as a result of the growing disenchantment with the war and the growing casualties in both the US and Australia. Nixon had taken office as President and, in view of the growing public opposition to the war, had instituted a ‘new policy’ for waging the war known as ‘Vietnamisation’. American troops were reduced on the ground, leaving the fighting to Vietnamese troops while the US military focussed on safer activities such as training, supply and especially flying bombers, gunships and defoliation planes. This was recognised by the anti-war movement as mere subterfuge and only served to create even greater cynicism, anger and determination to continue protesting. The Australian Government was publicly considering withdrawing some Australian troops, a move aimed at supporting Nixon’s Vietnamisation policy and simultaneously placating the Australian public.

The second Moratorium was changed in style and involved several radial marches into the city from points outside the CBD. A better sound system, more radical  leaflets and publicity and the precedent of success went some way to overcoming attempts by the Government to create public complacency through its ‘new’ policy directions which gave the impression that troop withdrawals were nigh. Some 80,000 demonstrators participated in what was considered a very successful march and which was designed to stop traffic by marching around the city instead of holding a sit-down as in the first Moratorium.

A third Moratorium was subsequently planned for June 30 1971 and this would focus more on draft resistance than before. Two reasons were proposed by the DRU to justify the heightened involvement of draft resisters in the Moratorium. The first was agreement that the growing troop withdrawals in 1971 would reduce public motivation to continue to demonstrate despite the fact that the war was actually escalating in terms of the bombings and the deaths of Vietnamese. A focus on the continuing conscription of Australians would add to the motivation to come into the streets once more. The second argument was the need to actively destroy conscription to ensure that future governments could not return to Vietnam or any other country to wage such a war. The DRU proposed to have several publicly acknowledged draft resisters with warrants out for their arrest on the back of the speakers’ truck and to protect them from all attempts to arrest them. This was seen as controversial and risky: some supporters would consider this as an invitation to violent confrontation from the police and others would be concerned about the consequences of failure to protect the draft resisters from arrest. Nevertheless, it was recognised as a great opportunity to promote draft resistance and to provide supporters with a form of direct action.

The march attracted more than 60,000 demonstrators. Dr Spock addressed the crowd to great applause. The five draft resisters (Michael Hamel-Green, Tony Dalton, Paul Fox, Mike Matteson and Gary Cook) spoke about the war and conscription and their own reasons for resisting the draft, to even greater applause. And hundreds of Commonwealth and State police marched at the edges of the demonstration with the intention of seizing the draft resisters when the opportunity arose. That opportunity never arose. As the march was winding up at Parliament House, having marched from City Square, demonstrators were asked to help protect the truck and march all the way to Melbourne University where plans had been made to enable the draft resisters to get back into the resistance underground. More than 5,000 demonstrators surrounded the truck and, escorted by hundreds of increasingly frustrated police, marched back to the student union building where the draft resisters were secretly moved to safe accommodation away from the university. Despite the anxiety felt during the march, it was seen as a major victory in a new phase of draft resistance and set the scene for an ongoing campaign of public appearances of draft resisters to show the public that when they had so much community support the government was not capable of enforcing conscription.

While my involvement was primarily as a student activist, and therefore I have focussed on these experiences, the reality is that the student movement was only one component of the broad anti-war and anti-conscription, environment, women’s liberation and indigenous rights movements that had their genesis in the 1960s and grew into major movements in the 1970s. The ‘70s saw their maturation and had a major impact on subsequent social and political developments with impacts still felt today. 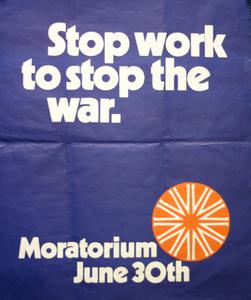 Poster produced for the Moratorium on June 30, 1971