Vida Goldstein was the most famous, and important women's activist in Australia in the first decades of the twentieth century. She was a life-long pacifist and a strong opponent of conscription during World War One.

Goldstein was born in 1869, the daughter of Isabella Goldstein, who became a prominent Melbourne suffragist. From the 1890s Vida joined this work and was soon one of the most active and influential members of the women’s movement. Goldstein was especially important in winning the right for women to vote in Victorian state elections in 1908. Vida also ran for office, becoming the first woman to stand for federal parliament in 1903 as a Senate candidate. She also ran – unsuccessfully – for the Senate in 1910 and 1917, and the House of Representatives in 1913 and 1914.

Not only were women’s groups amongst the first to oppose the war, they were the first to suffer censorship. In September 1914 a small military detachment raided the offices of Vida Goldstein’s paper, the Woman Voter, to try to force her to stop publication. When Goldstein, supported by labour newspapers, complained to the incoming Labor Minister for Defence about this censorship, he replied that such censorship was not the new Labor government’s policy. Nonetheless, shortly afterwards the War Precautions Act was passed, allowing just that.

Despite the success of the anti-conscription campaigns, Goldstein’s activity took a heavy toll. She had lost the political support of the pro-war members of the Women’s Political Association – by the end of the War there was no difference in membership of the two WPAs – and her newspaper, the Woman Voter, had a large debt. Goldstein turned her attention more fully to causes of pacifism and internationalism, but never regained the public prominence that she had before and during World War One. Vida Goldstein died in 1949. 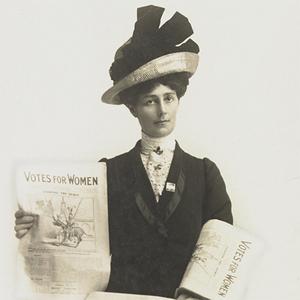