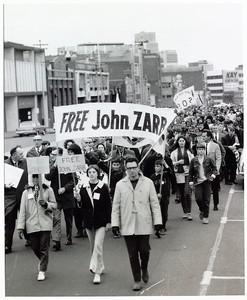 A march along Sydney Road Coburg towards Pentridge Prison in support of John Zarb circa 1969. John was imprisoned in Pentridge for his refusal to serve in the military because of his conscientious objection to the Vietnam War. The National Service Act did not recognize objection to a particular war as grounds for exemption from military duties. 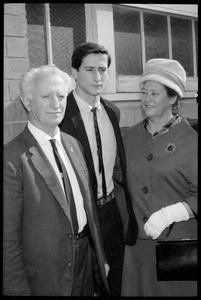 Bill White was a schoolteacher from Sydney and a conscientious objector but his applications and appeals to be registered as such were dismissed. He became a non-complier and was arrested and dragged from his home by three policeman during November 1966 and delivered to the army. He later was successful in obtaining full exemption from military service during December 1966. He is seen here with his parents.

Not all applications to be registered as a conscientious objector under the National Service Act (NSA) were successful. It is difficult to identify what the failure rate was. Statistical information which is available suggests about 25%.

Michael Cutrapi and Bill Perry were both Jehovah’s Witnesses from New South Wales. They could have expected to have received a full exemption from military service given their church’s strong neutrality to all war. Instead they were exempted from combatant duties only. They became non-compliers when they refused to obey a call-up for non-combatant duties.  They were summoned  before the Special Commonwealth Court in Philip Street Sydney. They were then forcibly drafted into the army and sent to1st Recruit Training Battalian at Kapooka. Both men refused to obey any orders, in particular signing for their army issue and putting-on their army uniform. They stated that they refused to obey orders because they were contrary to their Christian beliefs. As a result the army responded with a court martial on 1 March 1967 and sent Michael and Bill to Holsworthy Correctional Facility. Michael and Bill both stated they were placed in solitary confinement on bread and water. The cell contained no furniture and the men were forced to sleep on a concrete floor with just three blankets issued to them. It is unknown what their ultimate fate was.

Bruce Thomas Thompson was a miner at Mt Isa in Queensland. The Stipendiary Magistrate at Mt Isa had on 4 August 1968 dismissed the application by Bruce for full exemption from military duties. He appealed to the District Court at Townsville and Judge Cormach dismissed the appeal 22 November 1968. Bruce then appealed to High Court of Australia for a writ of certiorari to squash the District Court’s decision as an error of law and to have the appeal heard by the High Court. The appeal was heard by five judges of the High Court in Brisbane 23 May 1969. All rejected the application which was given on 9 August 1969 but they differed as to whether the District Court Judge Cormach had erred in law. Chief Justice Sir Garfield Barwick acknowledged Bruce’s genuine conscientious beliefs that he could not serve in a combatant or non-combatant role in the Vietnam War. But he noticed that Bruce was not a total pacifist as he had said that he would bear arms in self-defence, which he took to mean Australia and its territories. The Chief Justice dismissed the appeal because he ruled section 29A(1) of the National Service Act (NSA) only referred to total pacifism. In other words exemption based on conscientious objection under the NSA only applied to all war not a particular war like Vietnam.

Ian McLeod Wright was a national serviceman from South Australia. Ian was conscripted into the army on 8 February 1968. He informed his commanding officer on 30 August 1968 of his intention to apply for total exemption as a conscientious objector. He lodged an application on 2 September 1968. This was the day he was due to embark to participate in the Vietnam War. Stipendiary Magistrate Rodgers exempted him from combatant duties only on 13 December 1968. His appeal was dismissed by Judge Head of the District Court at Sydney on 24 March 1969. Included in the amendments made to the National Service Act in 1968 was an increased right increased the right of appeal to higher courts. Ian appealed to the Supreme Court of New South Wales. This was the first of such appeals following the 1968 amendments. The three judges dismissed the appeal. A reading of the judge’s decision reveals two main factors working against Ian. First, the judges believed that he was able to state his beliefs but he failed to demonstrate that these beliefs had operated to influence his life. Second, and related to the first, he had only recently come to hold these beliefs and  mention was made of his failure to apply for exemption before he was due to embark for Vietnam. In other words the judges believed that Ian did not hold deep-seated convictions concerning non-violence as a moral alternative to war.