Prime Minister Billy Hughes was confident that the 1916 referendum would produce an overwhelming “yes” vote that would enable him to go ahead with conscription. A measure of his confidence was his legally controversial September 29th 1916 Defence Act Proclamation just one month before the October Referendum. In anticipation of a “yes vote”, the proclamation required all 21-35 unmarried males or widowers without children to register by October 9th, attend a medical, be finger printed, and go into camp for military training. Some 191,000 were registered and trained across Australia under the proclamation; of these 80,570 sought exemption, and an estimated 2,500 were conscientious objectors.[3] Some refused to register (or refused to enlist after being unsuccessful in exemption cases) and were given 3 to 6 months’ gaol sentences in often harsh conditions.[4] One such was John Curtin, the unionist anti-conscription organiser (and 1941-45 Labour Prime Minister) who was sentenced to 3 months’ imprisonment in Pentridge after refusing his call-up notice (and then released after four days when the Proclamation was revoked).[5] It is likely, as some writers have noted, that the pre-emptive move of the Hughes Government in calling up eligible men before the actual referendum gave those affected “an unwelcome taste of army life just before they were to vote on their fate” and contributed to the negative vote.[6]

After the defeat of the first 1916 Referendum, Hughes faced a no-confidence vote within the Labor Party for his pro-conscription stance. With 24 other pro-conscriptionists within the Party, he led a breakaway group and joined with the Liberal Opposition to form a National Labour/Liberal Coalition that assumed government and went on to win the September 1917 Election. During the 1917 election campaign Hughes undertook to respect the “no” majority in the 1916 Referendum and not proceed with conscription without a further referendum. On November 7th 1917, Hughes cited an urgent need to reinforce the five Australian troop divisions (which had lost 38,000 dead and wounded in Ypres and another 17,000 at Messines and Bullecourt in September-October 1917), and called a second referendum.[7] He labelled the outcome of the first referendum “a triumph for the unworthy, the selfish and treacherous in our midst”.[8]

The wordings of both referenda were oriented to maximizing the “yes” vote. The first asked “Are you in favour of the Government having, in this grave emergency, the same compulsory powers over citizens in regard to requiring their military service, for the term of this War, outside the Commonwealth, as it now has in regard to military service within the Commonwealth?”.[9] The second referendum avoided even mentioning compulsion, simply asking “Are you in favour of the proposal of the Commonwealth Government for reinforcing the Australian Imperial Forces Overseas?”.[10] The first referendum on October 26 1916 resulted in a 72,476 majority “No” vote (1,160,033 “no”, 1,087,557 “yes”).[11] The second referendum, despite its indirect wording, and a more selective conscription proposal involving a ballot of single men aged 20-44 only (with exemptions for reserved occupations) was lost by an even greater margin, 166,588 against, with 1,181,747 voting “No” and 1,015,159 voting “Yes”.[12]

The success of the anti-conscription campaigns in securing a no-vote at both referenda is all the more astonishing in that the voting occurred in the midst of the war, with the government and almost all the mainstream newspapers, five out of six State Governments, most Protestant church leaders (with the exception of the Quakers), and wider establishment figures (as organised through the Universal Service League), all advocating the urgency of conscription and making highly charged appeals to voters’ patriotism, loyalty, and support for troops in the field.

The anti-conscriptionists’ success in persuading voters was also extraordinary in that it was achieved despite the Government introducing and zealously enforcing the October 1914 War Precautions Act that enabled it to censor any publications or gaol any activists deemed to be undermining recruitment and the war effort.

In her insightful account of the period, Bertha Walker, notes that “this was the first and only time that any country in the world was permitted to vote on whether it would conscript its young men for war”, and attributed much of the success of the anti-conscription to the “way in which people of the most diverse interests combined together on this special issue. Catholics, Protestants, Atheists, Trade Unionists, Labor Party members, Socialists, Industrial Workers of the World (IWW) members, Pacifists…all worked wholeheartedly for the common goal”.[13]

The role and contribution of the various groups within the anti-conscription campaign are evident at various periods leading up to each of the two referenda. 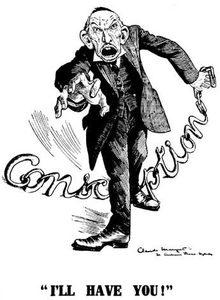 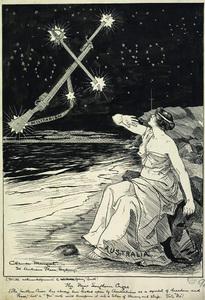