While the Moratoriums were a major part of the antiwar movement in 1970 the anti-conscription and draft resistance activities also continued. Organising a Moratorium march inevitably took a long time and significant resources; in contrast many anti-conscription activities were relatively spontaneous and immediate responses to the government’s registration and induction dates and the court cases for resisters and therefore were considerably more frequent and kept the opposition to the war and conscription highly visible.

However, the Government was excessively slow and apparently unwilling to actively pursue draft resisters, reflecting a recognition that conscription was not popular and that the growth in draft resistance would mean a growing number of resisters in gaol. This was not something the Government was prepared to entertain. Instead they slowly selected only a small number of resisters to bring before the courts. This was intended to scare potential resisters and, more importantly, to provide a public perception that the law was being enforced without creating a major public reaction. In reality only one had been gaoled by the end of 1969 and only a handful of draft resisters had been prosecuted by the end of 1970. The aim of the Government was to keep a low profile for conscription and the resistance to it.

To counter this a meeting of draft resisters and supporters was held in mid-1970 at La Mama Theatre in Carlton. The aim was to expose the government’s reluctance to confront draft resisters by directly defying it. The meeting formed the Draft Resisters Union (DRU) as an organisation to provide support and unity to existing and future draft resisters and to assist with the development and operation of the ‘draft underground’ which would hide draft resisters from the authorities. The DRU had widespread support from student groups such as SDS as well as groups like SOS and many trade unions.

One of the first acts of the DRU in late 1970 was to work with organisations such as SOS, SDS, local anti-war groups, trade unions and even ALP branches to create a highly organised ‘Resistance Underground’ which would not only hide and protect individual resisters but would actively seek ways to confront the Government’s National Service Act. Instead of hiding one or two resisters, as had been occurring since 1969, the aim was to awaken a community of resistance and to provide supporters with an active role in resisting conscription.

In early 1971 the DRU approached the Melbourne Moratorium committee members to propose that the third Moratorium should focus on draft resistance. Two reasons were proposed by the DRU to justify the heightened involvement of draft resisters in the Moratorium. The first was agreement that the growing troop withdrawals in 1971 would reduce public motivation to continue to demonstrate despite the fact that the war was actually escalating in terms of the bombings and the deaths of Vietnamese. A focus on the continuing conscription of Australians would add to the motivation to come into the streets once more. The second argument was the need to actively destroy conscription to ensure that future governments could not return to Vietnam or any other country to wage such a war. The DRU proposed to have several publicly acknowledged draft resisters with warrants out for their arrest on the back of the speakers’ truck and to protect them from all attempts to arrest them. This was seen as controversial and risky: some supporters would consider this as an invitation to violent confrontation from the police and others would be concerned about the consequences of failure to protect the draft resisters from arrest. However, after considerable discussion, mainly about the practical aspects of the proposal, the Moratorium committee agreed to the proposal.

The march attracted more than 60,000 demonstrators. Dr Spock addressed the crowd to great applause. The five draft resisters (Michael Hamel-Green, Tony Dalton, Paul Fox, Mike Matteson and John Scott) spoke about the war and conscription and their own reasons for resisting the draft, to even greater applause. And hundreds of Commonwealth and State police marched at the edges of the demonstration with the intention of seizing the draft resisters when the opportunity arose. That opportunity never arose. As the march was winding up at Parliament House, having marched from City Square, demonstrators were asked to help protect the truck and march all the way to Melbourne University where plans had been made to enable the draft resisters to get back into the resistance underground. More than 5,000 demonstrators surrounded the truck and, escorted by hundreds of increasingly frustrated police, marched back to the student union building where the draft resisters were secretly moved to safe accommodation away from the university. Despite the anxiety felt during the march, it was seen as a major victory in a new phase of draft resistance and set the scene for an ongoing campaign of public appearances of draft resisters to show the public that when they had so much community support the government was not capable of enforcing conscription.

Nevertheless, although this was a useful strategy, the DRU and SDS realised that at least 80% of 20-year-olds were still registering and most of those who were balloted in to the call-up were still complying with the government’s demands. In other words, the government could still try to ignore the opposition to conscription while maintaining the numbers they desired for the army. 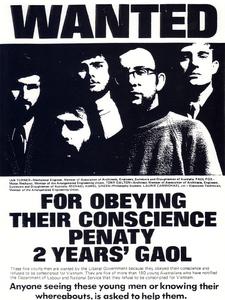